Like a million others, on March 23rd I marched for a People’s Vote. 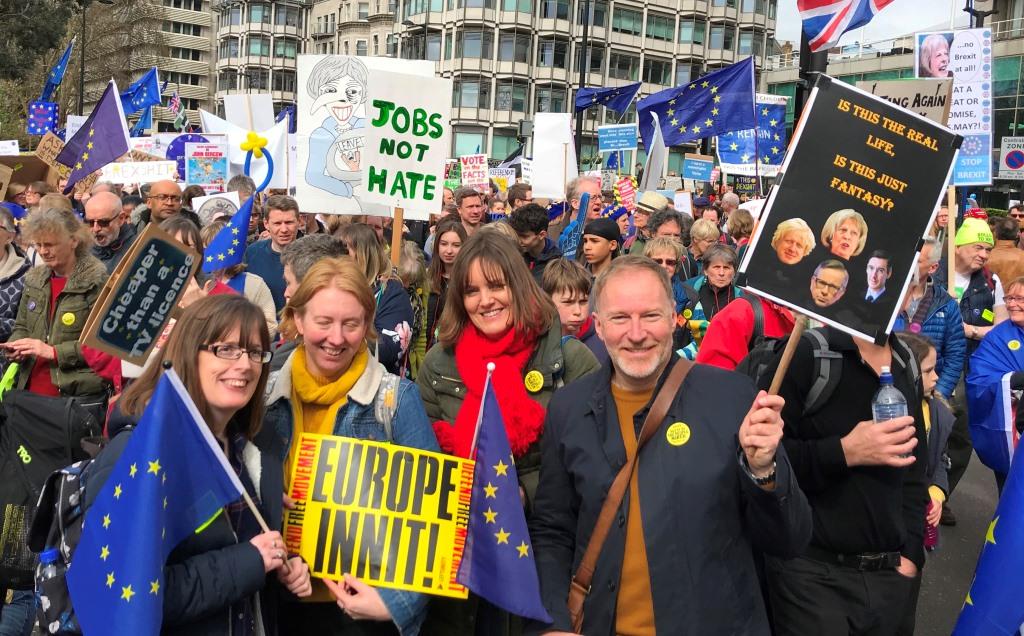 It was the second time in six months I’d taken to the streets of London and, once again, it was an uplifting moment I will never forget. My Queen-themed placard (“Is this the real life, is this just fantasy?”) raised a few laughs and provided good photo fodder.

But I’m a politician. People expect me – and rightfully so – to be marching, campaigning, and putting myself out there.

At October’s march I was joined by a friend from university days – a Labour supporter, actually, who’s disillusioned with Corbyn (aren’t we all?) – and lots of fellow Lib Dems. Before travelling up to London for the march, I reached out to another friend from uni days, Tim. “Will you come along the march?’, I asked. Now, Tim is a lovely guy – a father and husband to boot – but not particularly political. I didn’t think he’d come to London, but I thought I’d ask anyway. To my surprise, he said yes. “This Brexit mess has got me angry”, he wrote in a short email. And with that, we were set to meet up.

The sun was gleaming around Park Lane on that Saturday and there were thousands upon thousands of people rearing to have their voices heard. To get to Tim we had to walk through throngs of people. Politely saying ‘Excuse me’, we battled through the masses – my Bohemian Rhapsody themed placard drawing smiles and requests for pictures. Well I had to oblige, didn’t I?

Eventually, we found Tim, surrounded by flag-waving and poster-holding hordes. Then we went off to join the march.

After an hour or so of barely moving but talking excitedly, pointing, waving and laughing, Tim suddenly said, “I’m so pleased I came – but do you know this is the first time in my life I’ve marched for anything?!”

This was truly a moment of surprise and delight. Tim, aged 54 and a half, was for the first time in his life making a stand and demonstrating for what he felt strongly about. I felt joy. I felt pride. I felt that this, indeed, was a moment to savour.

It got me thinking – how many other Tims were in the million-strong crowd? Well, I did meet a few other first-time marchers that day and have heard tales of many more since. After all, this is a pivotal moment in British life. We Brits aren’t great at taking to the streets – we like to have a moan and, unlike our friends across the Channel in France, we do so from the safety of the sofa.

When I lived in France as a student, there were always demos going on – it was, shall we say, ‘de rigueur’.  On this island we do things differently, so when the British take to the streets in vast numbers you have to sit up and take real notice.

That peaceful march for a People’s Vote in its own way shook the foundations of politics. It said loud and clear, ‘we have had enough; we are the reasonable majority who think you’ve got it wrong and we call for this wretched government to put it to the people!’

Looking back just 2 weeks ago, the public’s anxiety concerning Brexit has only deepened, which is evident by the online petition to revoke Article 50, signed by over a whopping 6 million people.

And so, we need to thank all the Tims out there – the people speaking up for their beliefs – for taking the time to say what they want, because, in the end, I’m convinced they’re the ones who will change the outcome of Brexit.