Is new pilot another step towards the closure of Cheltenham’s A & E? 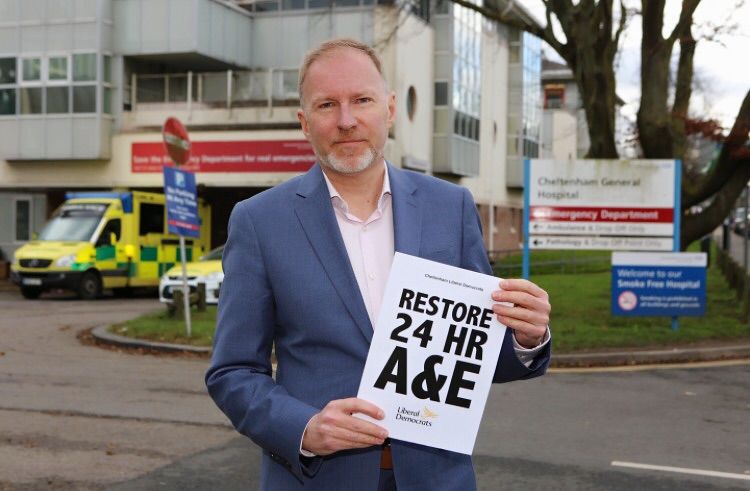 Liberal Democrats have once again raised concerns over the future of Cheltenham hospital as a new NHS pilot will see patients moved to Gloucester.

A letter circulated by Gloucestershire Hospitals Foundation Trust gives details of service changes over the coming months as part of a winter plan. From October 2017 to March 2018, all orthopaedic acute and trauma patients requiring admission or surgical intervention will be moved from Cheltenham General Hospital to Gloucestershire Royal Hospital.

“We’ve already seen Cheltenham’s A & E reduced at night between 8pm and 8am from a full doctor-led service to a restricted nurse-led operation in 2013. Martin Horwood MP and Liberal Democrat councillors opposed this permanent downgrading  at the time. In this latest move, the day time service is now being cut back at Cheltenham A&E.

“People turning up in pain with a broken leg or arm which needs an immediate operation, or someone with a broken hip which demands time in a hospital bed, will now be sent over to Gloucester.

“We are calling for the restoration of a full 24/7 A&E service at Cheltenham General and a properly funded NHS.”

Elected members in other parts of the county are also worried about the impact these changes will have on residents in their own districts, for example, Liberal Democrat Group Leader, Cllr Paul Hodgkinson (Bourton and Northleach) said:

“This news is troubling. People in the Cotswolds rely on Cheltenham as their nearest hospital so this will mean extra travel for them and their relatives. But what does this really mean for the future of Cheltenham hospital? Slowly but surely services are being whittled away and moved elsewhere. The future of this hospital is at stake – many people value it a lot and it must stay!”